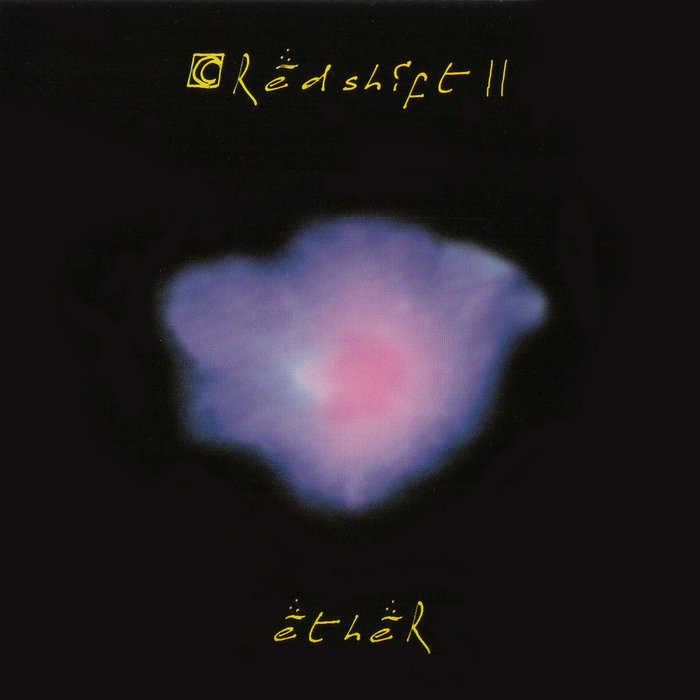 watcher0012 When it comes to sequencers Mark &
co are superior in every way. This may be their best album. Favorite track: Ether.

utdgrant I had been waiting patiently for someone to recreate the thrill of listening to '70s era Tangerine Dream. As the 1980s wore on, I was becoming less and less hopeful. The title track from 13:13 might not be the greatest six minutes of all time, but it's damn close! Favorite track: Ether.

Ryan Johanson A classic album. I bought it several years ago on another site but I keep coming back to it.

I love the fast-paced sequencing on display here. So many layers and rhythms all going on at once...to my ears, it's like the best kind of clusterfuck. It's like Tangerine Dream but with the more bizarre and discordant ambient stretches downplayed. I'm glad this group and ARC are around to keep that style alive. Favorite track: A Midnight Clear.
more...

CLP CD0013: 1998
"Ether" is the second CD release by Redshift and the first on the Champagne Lake label. The physical CD has long been out of print but the album has been available as a download for several years.
This album contains four tracks, the two longest being live recordings from Redshift's debut performance at the Jodrell Bank Planetarium.
This was also the first Redshift release to feature other musicians (the first album was essentially a solo recording).

The first track, "A Midnight Clear" was written (actually semi-improvised) and performed by Mark Shreeve, Julian Shreeve and James Goddard each playing a variety of synthesisers, electric pianos etc. The format of the piece follows the more "classical" style of electronic music employing more gradual transitions from rhythmic to non-rhythmic, from light to dark and so on.

The next track, "Bombers in the Desert", was actually a studio recording made after the Jodrell Bank concert. It is a version of a live piece made that night that suffered some technical problems. It is a rare example of Redshift using drum loops as part of the rhythm section during the more lively sequences.
This track featured the 3 previously named musicians and additionally the guitarist, Rob Jenkins.

The third track on the album is called "Static" and is a rather strange piece. Written and performed by Mark Shreeve and James Goddard it is a dark and brooding vignette centred around a threatening, crackling and wheezing bass line from an ancient synthesiser.

The last and longest track is "Ether" itself. This is also from the Jodrell Bank gig but this time with the added guitar parts from Rob Jenkins. In fact Rob creates the introduction to the piece using ethereal long delays and an e-bow playing technique.

I’ve listened to electronic music albums for more years than I care to remember, and in the time between acne and relatively slight but noticeable greying hair the number of EM albums must rank in the thousands.
Having of course helped to organise the concert at which large parts of this album were recorded I knew it was going to be one of the great albums, but as I write this review the question I am tussling with asks "is this the greatest of them all?"
Before I elaborate, let’s briefly outline what we have here. Two of the four tracks (‘A Midnight Clear’ and ‘Ether’), comprising over 50 minutes of the album, were recorded at the Jodrell Bank Concert on 7.12.96.
One of the tracks, 'Bombers in the Desert’, is a studio interpretation of another piece performed on the night. ‘Static’ is a short studio outing.
Stylistically the music could be termed "classic 70’s Berlin School". Three of the four musicians create the rich textural atmospherics and thematics, while Mark Shreeve provides the ever shifting tapestry of sequencing on the colossal Moog modular.

OK, so what makes this album so good? Well, I’ve often been quoted as saying that classic 70’s EM was abandoned far too prematurely and there was lots more to be discovered. This album goes further than perhaps any I’ve heard to push back the boundaries of this style. As a package it is nigh on faultless, with plenty of dark mellotron and synth thematics to savour and the added ingredient of guitar effects played to perfection.
But the trump card is the sequencing. In terms of sequencing it is quite simply the best example of its kind I have ever heard.
The rampant dynamics of the Moog are harnessed in spectacular fashion, and the complexity and variety of the sequencing is simply breathtaking. Every angle in the book is covered, and whole new sections are written on the fly. Sequence riffs barely stay still for a second. You think it can’t get any better, then the bass lines hit home. It’s like a thundering roller coaster.
A wall of sound which, to me, says everything about why EM can affect me like no other music. On ‘Bombers..’ a drum loop is thrown in for good measure - take care, this track could signal a China Syndrome for your speakers. I think it was the "review of ‘96" article where I said Redshift’s music was so far up my street that it was sitting in my living room with its feet up watching TV.

Well, ‘Ether’ is actually wearing my slippers, drinking tea and eating biccies! Seriously though, I consider this album a pinnacle in sequencing terms and it has all the supplementary decorations to make it an outstanding all round package. So, the greatest? I would say... (GG)

Tropical and transportive tunes with guests Coco Maria and Anchorsong.